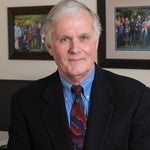 Since he left active duty military service as a JAG officer in 1979 and moved to Rochester, Don has provided legal services as a business lawyer and as a litigator. His professional work has earned the highest ranking (“AV”) from Martindale-Hubbell,* the leading national rating organization for legal ability and ethical conduct.

Don provides advice on day-to-day issues and works with clients to prevent small issues from becoming significant problems. He also reviews a wide variety of agreements for individuals, such as employment, independent contractor and non-competition agreements.

Don also represents investors who suffered losses in the stock market because of broker negligence or misconduct.

Thank you for contacting us. We will get back to you shortly.

Please complete all required fields below.